Within the last 2 years the sporting community has been exposed to 2 tragic deaths of college athletes at two of our major universities.  Both individuals died from an apparent accidental drug overdose. Autopsy reports revealed that a combination of substances in their systems ranging from opiate medications, alcohol and anti-anxiety drugs were the cause of death.  These incidences were not the result of medications being over-prescribed by their universities, but the ability of an athlete to obtain additional medications on their own or from other sources, not known by the universities.

The question is what preventive measures can be put in place to reduce the chances of athletes seeking additional pain medications and other drugs on their own? As of today, no Prescription Monitoring Programs are being used within athletics. When athletes suffer injuries of any kind, and pain medications have to be prescribed, routine RX monitoring should begin for the following reasons:

1). Tracking to see if an athlete is seeking medications from other sources (Doctor Shopping)

4). Assessing if any athlete is receiving other RX medications that can counteract with narcotic pain medications

Some athletic programs are concerned with potential STIGMAS that could be placed on them when deciding to bring in professional speakers to address prescription drug abuse in sports for example:

Stigma # 1:”Will our program be labeled as having this problem if we bring someone in to talk to our athletes?”

Stigma # 2: “Will our athletic/medical staff be blamed as contributors to this problem since they are the ones that monitor the dispensing of RX drugs?”

These are legitimate concerns, but most athletes are not dying under the care of team staff, they are seeking medications on their own.

No athletic program should be excluded in considering implementing this program. There have been several other deaths on various levels of sports team, without any form of additional prevention put in place. Educating our athletes is the key to reducing the risk of accidental drug overdoses & deaths in sports.  Athletes need to understand the high risk and dangers of self-medicating.

For more information on this topic, contact Marcus Amos at ml_amos06@yahoo.com

If you want your staff to be happier and more enthusiastic about their jobs, you will need to learn skills that will help make leading your team more productive and personally rewarding than you ever expected.  To begin your journey of discovery, here are 4 of my Pearls of leadership wisdom and some practical steps you can take to turn insight into action:

– If you want to be a more effective leader in your company, you have to study leadership.

Question:  Are you reading leadership books or listening to leadership CD’s that will take you where you want to go in the next five years?

– You have to process your leadership inwardly.

Question:  Are you taking time to self-reflect if you are becoming the leader you want to be?

– You have to practice your leadership outwardly.

Question:  Are you applying your leadership strengths in your daily work as a leader and seeking feedback from others regularly on your leadership effectiveness with them?

– You have to be willing to pass your leadership skills to others.

Question: Who are you developing to take your place?  At the end of your life, you will not be asked what you have accomplished, but who have you helped.

“Self-knowledge is the beginning of self-improvement.” (Spanish proverb)  It may take some time to sort through the various ideas to find one that fits you.  Be patient, but determined.  Find your special talents.  Remember, “Management is doing things right; leadership is doing the right things.” (Peter Drucker)

"Your presence added much to a program that has become the educational backbone of the NBA Experience."

"Many, many thanks for your refreshing insights and positive approaches to coping with change during these challenging times of organizational downsizing."

"Earl is one of the best presenters I've had the opportunity to hear on the subject of stress."

"Earl, this is our Ninth Annual Conference and the numerous favorable comments from the staff indicate this was the best presentation ever."

"Your ability to making others laugh is a precious gift. Thank you for making people's loads lighter."

"Your presentation was interesting, informative and very entertaining. Everyone I've spoken with since the ABAC meeting gives you positive, rave reviews."

"The speech you gave regarding home and work stress management received so many compliments that it can only be considered a grand success." 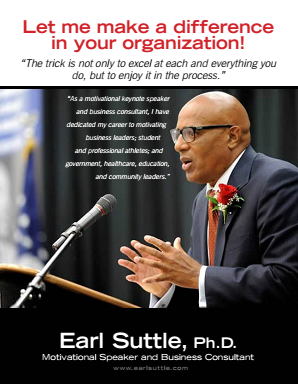 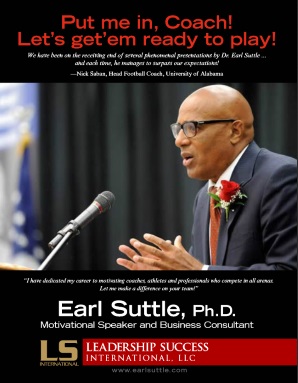